Head here for a meal! The dining area is accessible at any time of the day.
Post Reply
32 posts 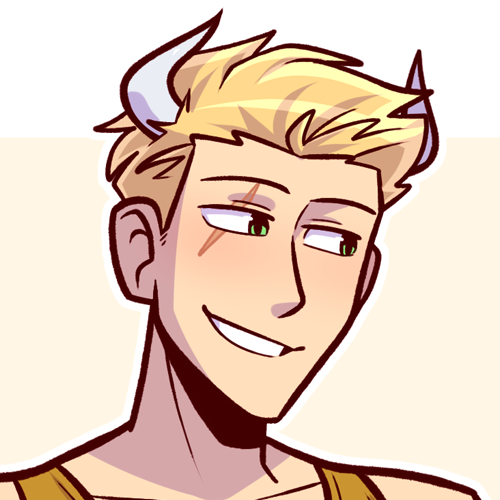 If there was anything that Aster could appreciate, it was flair - and ripping a chunk out of a Beowulf with one's teeth was nothing if not dramatic. Though he didn't really say anything in response to what she had planned, it was clear by the look on his face that he was at least imagining what it looked like, and the slight smile that crossed his lips most likely meant that he approved. Her asking to be let down immediately shook him out of his reverie though, and he set her down at once. He did so gingerly - a sight that might have been a little disconcerting to those used to his brasher, boisterous, and less delicate side.

"My number? Oh, sure. Lemme just..." He rummaged about in his pocket for a few seconds, trying to figure out which of the few items jammed into there was his scroll, until he pulled out the device. Held out towards her, the screen showed his number. "Just give me a call and I'll come right over. We totally should do this again!"
SOLDIER KEEP ON MARCHING ON
HEAD DOWN 'TIL THE WORK IS DONE
--🎜---
#CFB53B
Extended Profile
Top Al was a little disappointed when he did not give a response to her probably stupid plan of biting a Grimm, but then she saw that smile and realized what he was doing, he was projecting the scenario in her head, so she took it with an internal shrug.
She herself quickly typed his number into her scroll, smiling as she entered him into her contacts under "Big and Horny", very appropriate, but she always preferred giving people nicknames, another way Al got her kicks.
Al quickly sent him a text message, with a simple smiley, so he could quickly save her number too.
"There you go. And yeah! Maybe some day when I actually got more energy left to mess around with."
She said with a shrug, before stuffing her scroll back into her pocket.
"I'll c'ya around then, Aster."
Al said, as she turned around and headed into the dorms, giving him a smile, as she lifted her mask once again to show him a smile.

Still looking back to him for a bit, Al walked off, propping herself up on the railing before she took to just slowly walking inside.
Al chatters in #FF5500
And may sometimes use her head in #FDAD62
Top
Post Reply
32 posts