This areas in between the various buildings of the Academy. Perfect for relaxing!
Post Reply
6 posts • Page 1 of 1 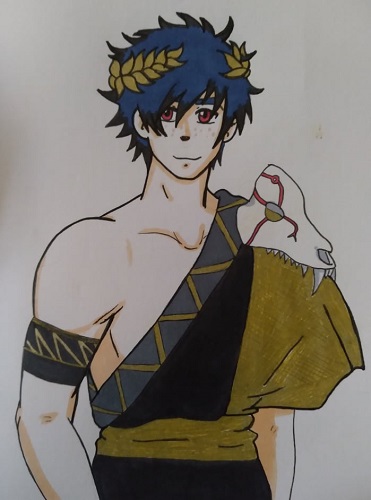 Pyry had spent the better part of his morning gathering a bunch of flowers for his next adventure with Erin. She, like a lot of tough girls he knew, liked to pretend she was beyond feminine arts but he knew she'd have a lot of fun making crowns. Everyone liked making crowns. Boys included, they just needed a safe space to do so. Today he would be Erin's safe space. He'd even picked flowers he knew she'd like.

Lisianthus. Darker purple with a hint of orange in the middle. Less texture which helped it stand out against the statice.

Red carnations. A break from all the purple. Petals that weren't too textured but not smooth either. She'd love them.

Maybe they weren't flowers that traditionally went together but he was going for aesthetic, not meaning, when he chose this batch. Erin didn't seem the type to care too much about meaning behind plants, but maybe he'd be surprised. There were more flowers of course but they were more suited to his tastes.

He scouted out an tree that let light filter through it's branches but didn't leave them burning in it's rays. Setting down the baskets of flowers, he laid out the same blanket he had had at their rooftop meeting.

Checking his scroll he smiled, she'd replied she was almost there. Adjusting his circlet and toga he sat down and tried to not look too excited.
The only unfair fight is the one you lose.
Top 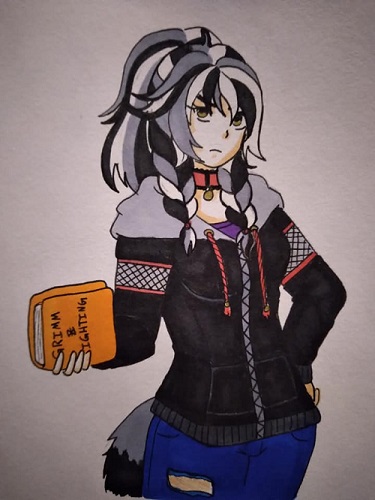 Here she was again, off to meet one of the most annoying people she'd ever met in her life. ... She must like the attention or something. Maybe she was one of those girls who got high off compliments. She frowned. What girl didn't like compliments? There was something to be said about people saying something about you was cool. Well people her own age anyway. When old men were gross there was nothing nice about it.

Pyry had suggested they make flower crowns today and despite her efforts, she couldn't say no. It sounded like fun, she'd never seen a guy as muscled as Pyry making a flower crown. Plus, she liked flowers.

As she approached the gardens she sent a message telling him to be on the lookout. It was doubtful that she'd have a hard time spotting him, but better safe than sorry.

As she'd expected, no issues finding someone like him. He stood out even here. Scanning the area she had spotted him under a tree, on blanket, next to a few baskets of flowers. The guy literally brought baskets of flowers. She'd assumed they'd have to pick them so points for being prepared.

He had that ridiculous smile when she approached but she decided to be civil. Maybe he wouldn't sys anything stupid today.

She searched his face and stopped short. "Hey, you have horned eyebrows today."
There is no such thing as justice, the best that we can hope for is revenge
Top

Laughing he wagged his eyebrows as though it were a compliment. "Little princess, my eyebrows are always horned. You just can't usually tell because my damn hair is so shaggy." Taking off his circlet he smoothed back his hair then placed the circlet back like a hairband so it stayed off his face. "I think I'm a little hurt than you never noticed." Looking away he feigned offense before looking at her out of his peripherals with a sly grin. "Althoooough, I guess I can take that to mean you've been looking at other parts of my body." Flexing his pecs he winked at her.

"Enough of that though. I promised a flower crown and a flower crown you will get." He patted the spot next to him. "C'mere, you should probably sit close so I can show you how to tie the flowers, it can be pretty tricky."
The only unfair fight is the one you lose.
Top

He was still calling her little princess. What was that about? She didn't recall ever doing or saying anything that would make him think she was high maintenance... Odd.

He pulled his hair out of his face with a complaint that just did not sound genuine and she was surprised to see that he was quite good looking with his hair pulled off his face. Sure, he was attractive normally but, without the hair in the way, she could see his eyes and eyebrows better, but something else caught her attention: he had freckles.

A small, quiet, "Nnn." slid from between her lips and she immediately cleared her throat to cover it. What the heck was that? She hadn't made that noise before. It took a second to register that she was attracted to him and the noise was just a manifestation of that. Wrinkling her nose she shook her head at herself. She was acting like some school girl. Okay, okay, she technically was a school girl but she didn't need to act like some starry eyed, lovesick, puppy.

While he was chatting away about the delicacy of flower tying she reluctantly sat next to him. Or... Well maybe not so reluctantly. "Don't take this the wrong way but, well, you're pretty handsome." She could see his face brighten and she held up a hand. "I am not saying I like you or anything, you are just attractive - physically - and if I didn't tell you now you'd probably catch me staring or something and get the wrong idea." She picked up a red flower and eyed it for a second. "I have no issues admitting you are aesthetically pleasing but we're just friends."
There is no such thing as justice, the best that we can hope for is revenge
Top

Erin made an odd noise in her throat which she then cleared, and he glanced up at her with slight concern. Please tell me she isn’t allergic to any of these flowers. He thought to himself with an inward frown. That would be the worst, but wouldn’t she have told him if she were allergic to something? She wasn’t sneezing or anything and her eyes weren’t watering but he’d still keep an eye on her.

Pyry smiled when Erin sat next to him. That was a step forward, last time they'd hung out she’d sat rigidly across from him and never really seemed to be comfortable.

He was midway through a demonstration on how to gently tie the knots when she called him handsome, and he snapped the stems he was working on. Eyes widening, he turned his face away from the ruined flowers in his hand and towards her face as if her eyes would tell him he'd misheard. No, he'd heard her right, and she continued on about how it was a physical attraction, not emotional, finishing with the fact that they were just friends. Friends? She considered him a friend now? “Wow.” His pulse quickened and he couldn’t stop the goofy grin from taking control of his face. "If I’d have known that moving my hair out of my face would be what finally made you like me, I’d have done it forever ago.”

He wished he hadn’t gone straight for a joke. He wanted to be smooth and take it in stride, maybe pretend her opinion on his looks didn’t matter all that much, but no. He just had to show his cards. It wasn’t often that he was frustrated at his own straightforward, happy-go-lucky, flirty self but this was one of those times. Again, he wasn’t trying to marry the girl or anything, but he did genuinely like Erin’s sour attitude and wouldn't mind getting closer.

“If it makes you feel better, I think you are beautiful too little princess.” He said with a wink as he picked up two more flowers. “So beautiful in fact that you deserve a crown.”
The only unfair fight is the one you lose.
Top

It was clear that he wasn’t expecting her to call him attractive – the obvious look of shock, quickly replaced by disbelief, the way his eyes shined when he realized she was serious. Ugh! It was criminal how much she wanted to stare at his face, to see the different expressions. Would he stay handsome no matter the expression or would she inevitably find the one that did not make her knees weak?

She needed his hair back on his face. Something about those red eyes and freckles illuminated by the sun... What was her think with boys with red eyes?

Then he had to go and ruin the picture by speaking. Of course. Of course, he would come back at her with a line. At least she could always rely on his personality to pull her back to reality. So long as he kept coming at her with those lines, she was in no danger of falling for him. Gorgeous as he may be, that attitude of his would ensure he stayed safely tucked away in the friend-zone with Bartok. The last thing she needed was for boy drama to get in the way of her journey to becoming a huntress.

Rolling her eyes at his compliment she smirked. “Yet, somehow, I am not beautiful enough to get to wear your crown.” She teased as she grabbed flowers matching the ones he was holding to follow along with his demonstration, she'd never made a flower crown before and it genuinely seemed like a lot of fun. As she watched him slowly go through the demonstration again she decided to keep the conversation going. “I’ve been meaning to ask, what is with the ‘little princess’ thing? I don't feel like I am high maintenance, I certainly don't look the part, I don't speak hoity-toity... I just don't see it."
There is no such thing as justice, the best that we can hope for is revenge
Top
Post Reply
6 posts • Page 1 of 1