A collection of the previously approved/denied character's applications complete with feedback posts for future reference.
Locked
3 posts • Page 1 of 1

Age: 21, me and Caelum share a birthday and our age
Experience: none besides some basic dnd roleplay with my family, nothing online
Example: will fill out once clarified
Last edited by Caelum Saphir on Mon Jan 03, 2022 7:39 pm, edited 1 time in total.
Top 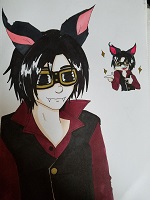 Normally the three questions are posted, like your age, experience, and a RP sample. But technically under the rules it does state that those are optional. I advise you do find them in the "How Approvals Work" Thread, but not against the rules to not fill them out.

Apperal:
His outfit is assymetrical, borrowing fantasy armor designs and mixing it with historical Roman outfits. I like it. We are a tad nitpicky about words that directly relate to our history, like 'Japanese' or 'Spanish' or 'Mayan' aren't really encouraged and should be changed to further descriptions of their design. Linking multiple pictures that you find into the 'Character Picture' slot at the top of your profile with a tag for each describing what pieces of armor or a base or something that he has could work out as well.

For example, when you say 'Roman Gladiator' I either think of a roman soldier with the leather skirt and armor and helmet, or I start thinking of the different armor types from 'Gladiator' with Russel Crowe. Your own description of the blue metal and the leather harness help, they do, but I only vividly see the arms and legs, the chest and helmet are sort of blurred. A Harness could be anything from a breastplate to something a little more raunchy.

Backstory stuff:
Put in some paragraph breaks, be easier to read that way.
Grew up a pit fighter, had fantasies of Huntsmen and heroes, but wouldn't the Huntsmen who taunted him sort of shatter that image? Or is he holding onto the dream so tightly that he refuses to believe that that man was a true Huntsmen? That he was going to show him up, be a true hero for the people? This could add more to his character. One who holds onto dreams and aspirations very tightly, one with a clear vision of what to become and why. He'd be focused and determined and have a goal in mind, trying to live up to be a hero. He could live up to it, or he may fall and have to pick himself back up.

However, none of these break rules or is anything I don't like to see, so I'm voting a yes.
What I listen to when writing Bartok
Top A lot of what I wanted to say I already said in discord or has been mentioned by Bartok.

I think Caelum is quiet a cool character with an interesting although concept.